What is in a Name? Sparks Hall 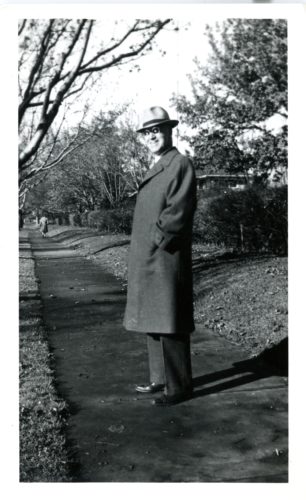 When Loren Sparks arrived on the campus of the Washington State Normal School (WSNS) in 1913, to serve as the school’s assistant principal, the student population was about 200. By the time he retired in 1950, it numbered some 1,600 and the name had changed to Central Washington College of Education.

Sparks was born in Plainfield, Wisconsin and attended grade school, high school, and normal school in nearby Stevens Point, Wisconsin. Following three years working as a teacher and principal in Wisconsin, Sparks was hired in 1909 to serve as principal at Lincoln Elementary School in Wenatchee, Washington.

About a year later, Sparks returned to his home state to study at the University Wisconsin but left after a year to take a position as a principal in Weiser, Idaho. In 1913, he was appointed assistant principal of WSNS, under Principal/President William E. Wilson.

His duties entailed supervising the seventh, eighth, ninth, and tenth grade classes in the training school as well as coaching the normal school’s athletic teams and teaching physical education.

He returned to Ellensburg, taking a position as assistant director of teacher training and head of the training school (now known as Edison School). In 1924, he was named Director of Teacher Training, a position he retained for four years.

In 1928, Sparks took a leave of absence to study at the University of California, Berkeley. He returned to Central in 1929 and became a full-time teacher in the education department. In 1931, he earned a EdD (Doctor of Education) degree.

During his long career at Central, Sparks served as advisor to the Intercollegiate Knights, Claw Chapter, a national men’s honor society, for 27 years.

After 36 years of teaching at Central, Sparks retired in August 1950. In a retirement statement that appeared in the Hyakem Yearbook of 1950, Sparks said one of the most satisfying things about his career was “seeing our training school grow from a position of leadership in the state to national leadership.

“There is something interesting in the life of an individual who has grown with an institution professionally,” he continued. “At the time of reaching the point of separation, there is a strong feeling of regret of leaving this institution as the time of its greatest growth, both in numbers and in an improved professional program. When you approach the point where you are no longer of service to something that has been an integral part of your life, you are led to the point of view when you wish there was no such thing as old age.”

Sparks and his wife spent the next few years in Arizona, where he taught parttime at the University of Arizona, before relocating to Enumclaw, Washington. He died in his home in April 1962.

Sparks was posthumously honored for his years of service to the university with the opening of Spark Hall, a residential building, in 1966. Part of the Bassetti complex of buildings (designed by noted Seattle architect Fred Bassetti), Sparks Hall incorporates an architectural design that represents the transition from Mid-Century Modern into Late Modern style.