What is in a name? Barge Hall 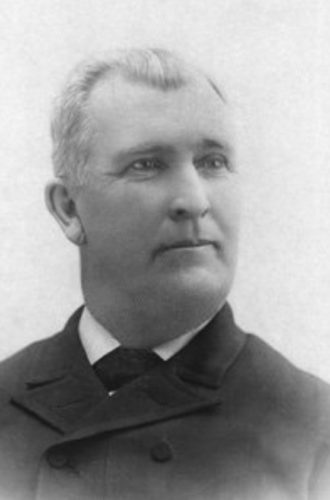 Few buildings on the CWU campus are as recognizable as Barge Hall. It was the oldest and first building constructed on the Ellensburg campus. It’s the tallest building on campus. It’s stately and majestic, and looks like a college building ought to look. It’s where the university president’s office is located.

But who was Barge, the building’s namesake?

The brick and stone structure that today serves as the administrative heart of the university, is named in honor of Benjamin Franklin Barge, the school’s first principal—or what today we would call president.

Barge was born in Concord, Massachusetts in 1834. After attending local schools, Barge graduated from a three-year course at Yale University and became a teacher in Louisiana. After eight years there, he became a teacher in Illinois, which led to his serving as county superintendent in Geneseo, Illinois, for 11 years.

In 1881, Barge temporarily left the education profession, becoming an agriculturalist and stock raiser in Iowa for six years. He followed that with a three-year stint as editor and publisher of a Minnesota newspaper before moving to Olympia, Washington in 1890.

A year later, he was tapped to serve as the principal for the new Washington State Normal School (now known as CWU) in Ellensburg. According to the Geneseo Republic newspaper, reporting on his appointment, “In him, there is that rare combination of unexcelled ability as an educator and masterly executive qualities—the student and the man of affairs symmetrically combined.”

Barge, often described as a good public speaker and passionate promoter of the school, immediately set out to get the Normal School off the ground in spite of a serious lack of financial support from the state of Washington. He quickly developed a teacher training curriculum and hired three teachers.

Since the new school lacked even a library, Barge offered students use of his personal book collection. Additionally, no money was allocated to construct a school building, so Barge made arrangements for classes to be taught in temporary space provided in the Washington Public School located on East Fifth Avenue between Sprague and Anderson streets.

In 1893, the Washington legislature approved funding to construct a building for the Normal School and construction began on land near the Northern Pacific Railroad tracks that had been donated for the university’s use.

Construction continued from August 1893 until completion in the summer of 1894. Meanwhile, Barge, who had overseen the school operations throughout the school’s first three years, was asked for his resignation by the school’s Board of Trustees.

According to historian Samuel R. Mohler, there was not a public demand for Barge’s resignation and appeared to be no political reasons for his removal.

“It may be that the Trustees, while recognizing his service as promoter and publicity agent, had concluded that Mr. Barge was not entirely qualified by personality or training to give direction to a program for professional teacher preparation,” Mohler wrote in a history of CWU. “Perhaps the reasoned that the new building would allow an improved program and that a clear break from the past was desirable.”

The Trustees, however, decided to recognize Barge’s contributions to the school by naming its new building in his honor.

After the announcement, Barge was lavishly praised in local newspapers for his pioneering efforts. A year after resigning, Barge was elected to the Washington House of Representative, serving one term (1895-1897).

From 1896 to 1900, Barge served on a special commission negotiating treaties with Native American tribes in the Pacific Northwest. He relocated to Northern Yakima, where he became successful in real estate and irrigation ventures and was elected to the school board.

As for the building that carries his name, Barge Hall served as the school’s main building, housing classrooms, a library, laboratories, administrative offices, and even a gymnasium. The structure suffered minor damage during an earthquake in the late 1920s and more significant damage following a quake in 1949.

Following that tremor, the building’s main cupola was removed and replaced with a neoclassical brick crown.

In 1991, it was decided the nearly century-old structure should be renovated and restored to its original appearance, which was completed in 1993.

While the classrooms, library, labs, and gymnasium were all relocated over the decades, Barge continues to serve as the administrative hub of the university, still housing the office of the president, vice presidents, and other administrative leadership.