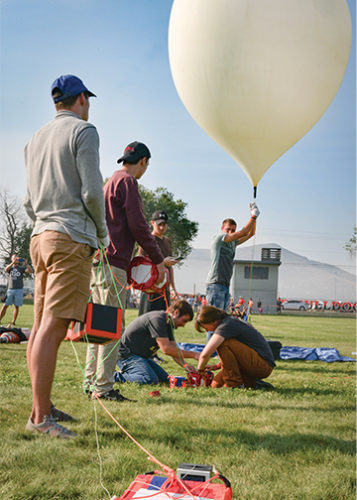 Members of the CWU Rocket Club prepare to launch a weather balloon with scientific instrumentation attached.

When CWU professors aren’t teaching, grading papers, or crafting lesson plans, they are often conducting research on campus or in the field.

The processes they follow, the technology they use, and the data they collect are used to prepare students for careers in science, medicine, engineering, and academia. But many of the research projects currently taking place at CWU are also intended for a broader audience. With the help of new technology, these scientists are taking steps to benefit the world at-large.

Andy Piacsek, an associate professor of physics, said he and his colleagues enjoy exploring technology-based research projects for a variety of reasons.

“We want to help people in the real world, but we also have a curiosity about how things work,” he said. “That’s just part of being a scientist.”

In Piacsek’s specialty area of acoustics, he employs high-tech instruments and computer software to study how sounds and vibrations travel in complex situations. One project involves testing stringed instruments to determine if they sound better after they have been played for an extended period of time.

Conventional wisdom says a new instrument should sound better after it has been played for a long time. But some in the music industry have been wondering if this assertion is true.

“Some luthiers [someone who builds and repairs string instruments] charge extra for mechanically pre-vibrating their new instruments, but there is a question about whether the customer is getting anything out of it,” Piacsek said. 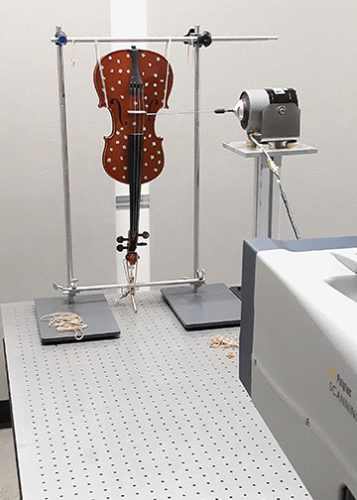 A violin is set up for acoustics testing, using a shaker and laser-scanning vibrometer.

Hammond Ashley Violins of Issaquah has asked CWU to study their inventory and compare the sound of unplayed instruments to those that have been artificially played for many years. Using a $350,000 piece of equipment (purchased from Discovery Hall’s equipment budget) called a laser-scanning vibrometer, Piacsek and his students are creating digital maps of the instruments’ vibrations to solve the mystery of whether pre-played instruments do, in fact, supply better acoustics.

“We’ll keep testing them over time to see if there’s a consistent change,” he said. “Then we can ask why they’re changing—if they’re changing at all. The result of the study will help the industry decide if pre-vibrating new instruments is even necessary.”

Similarly, Piacsek’s Physics Department colleague Benjamin White uses other forms of emerging technology in his laboratory to develop solutions for real-world applications. The assistant professor, who specializes in solid-state physics, has been conducting research with superconductors and magnetocaloric materials during his five years at the university. Both feature practical applications and environmental benefits.

White hopes his thermodynamics research, which makes use of numerous magnetocaloric materials, will contribute to the development of more energy-efficient refrigerators.

“Magnetic refrigerators can operate more efficiently than traditional refrigerators, but the problem is, we haven’t found the best materials yet,” he said, adding that some of the most effective materials contain gadolinium, which is relatively rare and would be too expensive for everyday use.

Another useful magnetocaloric material is manganese-arsenide, but White said that compound can’t be used for magnetic refrigeration because it is too toxic.

“The work we’ve been doing has shown a lot of promise, but our goal would be to find non-toxic materials containing common and inexpensive elements that will achieve the same results,” he said.

White also has been making progress with superconductor materials. The goal of his superconductivity research is to discover a material that might someday be able to replace copper wires in households.

“With current technology, you’re always losing some energy, but if you could replace all of those wires with superconducting wires, you wouldn’t have any loss,” he said. “That would create better efficiency throughout the electrical grid. Electricity would become cheaper and we wouldn’t need to produce as much of it.”

Another CWU Physics Department faculty member employing the latest technology to forward her research is Darci Snowden. Over the past few years, the assistant professor and planetary scientist has been helping her students build instrumentation devices that can be attached to weather balloons. 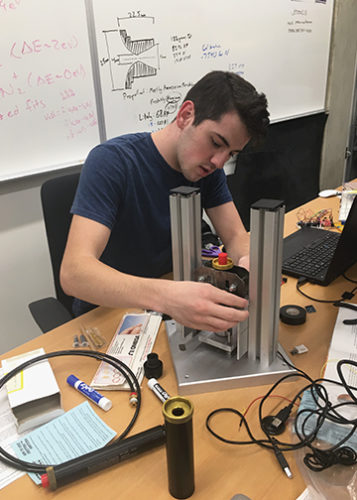 Snowden’s recent work has centered around creating micro-controllers, called Arduinos, and mini-computers known as Raspberry Pis. The relatively inexpensive Arduinos communicate with sensors and perform simple tasks like moving a motor. A Raspberry Pi, on the other hand, is a more sophisticated device that can be connected to monitors and acts like a mini-computer. Raspberry Pis also can be operated by Linux operating systems.

“This technology is being used more now with the emergence of the student robotics competitions, like FIRST (For Inspiration & Recognition of Science & Technology),” said Snowden, who also serves as the faculty advisor for the CWU Rocket Club. “The Arduinos and Raspberry Pis are easy to use and they show students what it’s like to build actual space instrumentation.”

After the students develop instruments using the micro-controllers and mini-computers, they attach the devices to weather balloons and launch them into the atmosphere—as high as 100,000 feet—where the devices record data that is stored on the balloon and recovered after the balloon lands.

“Everything is automated, so once the devices are up in the air, they’re out of our control,” Snowden said. “You can’t make any adjustments. They just have to work. Having that kind of hands-on experience is really valuable for students who want to go into engineering.”

Some Rocket Club members are working on other high-tech projects to prepare for careers in aerospace and rocket science. One student is working on a wind tunnel using principles of fluid dynamics. Another has developed a thrust table that measures force and pressure inside a rocket motor as a way of testing engine and nozzle designs.

“Rocket science is enjoying a bit of a renaissance with companies like SpaceX and Blue Origin,” Snowden said, adding that there are a growing number of career opportunities in Washington state. “Using this type of modern technology is a great conduit to teach students how things are done in the real world.”