Several years ago, I received an email from a woman who was eager to share her story. She and her son, soon to be a first-year student, were visiting the CWU campus in Ellensburg for the first time and needed to stop by the Registrar’s office. They had mistakenly gone to Barge Hall, where they were told they needed to go to Bouillon Hall. Confused and a little frustrated, they stopped the first person they encountered outside of Barge to ask for directions. The man responded by immediately offering to guide them to the Registrar’s office personally.

As they walked across campus, she said the man chatted about some of the buildings they passed and asked what the woman’s son planned to study. He extolled the virtues of Central and told the young man he had made a good decision. He walked them into the Registrar’s office and then asked the staff to help the woman.

“Certainly, President Gaudino,” one of them answered.

In her email, the woman said she had no idea the nice man who had been so helpful was the head of the university, and she was impressed that he was so approachable, friendly, and kind. She was certain her son had made the right choice in deciding where he wanted to go to college.

Stories like that define the tenure of President James L. Gaudino at Central. 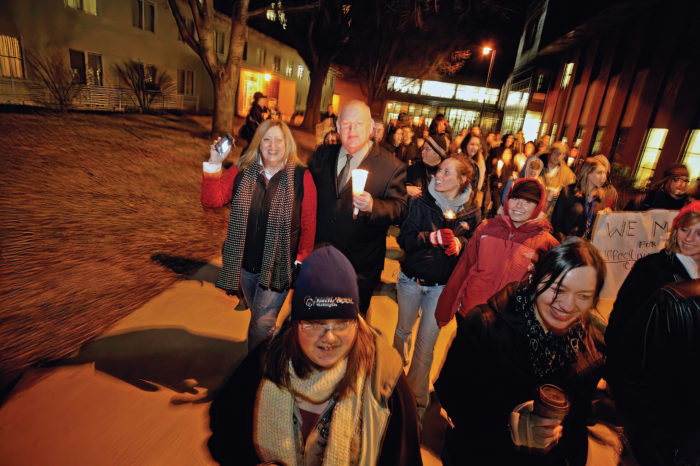 He has made that welcoming and approachable spirit the school’s external image, and its reputation. It is not surprising that Central has experienced record first-year enrollments and is now the most diverse public university in the state.

Since arriving in January 2009, Gaudino has also presided over an institution that has experienced an unprecedented building boom. The university has modernized its enrollment management, budget management, and data management systems.

“I am proud of those accomplishments, but I cannot take credit for them,” he said about his CWU achievements. “All that we have achieved over the past 12 years is the result of working with the people that I’ve been surrounded by. Central is a team, and the credit goes to the community we have built.

“No president does it alone,” he continued. “No one person has the time, the breadth of experience, or the monopoly of good ideas. Success is the result of working with and relying on the people around you.”

That reliance on a team to succeed can be traced to Gaudino’s youth, when he was a standout athlete in school and later during his years serving in the Air Force.

“I most proud of our efforts to improve our culture and systems of shared governance. That has allowed us to achieve, and encouraged us ask ourselves collectively, ‘can we be better tomorrow than we are today?’” he said. “The answer is always that we can, and our sense of community gives us the strength to constantly improve. That is the hallmark of a great university.” 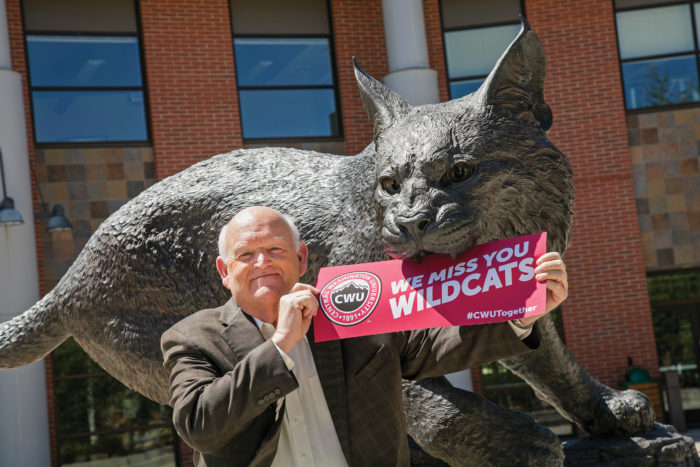 Gaudino said what he will miss most about leaving his position are the people he worked with during the past 12 years. “I have had the honor and privilege of working with a talented and dedicated group of faculty, staff, and students,” he said. “One does not often find that in life, and we’re going to miss it.”

Gaudino said the reward of being president is the pride he has felt in the achievements of others: “My private conceit is feeling that I that helped facilitate the work of others.”

To illustrate his point, he thought back to a few years ago when he and his wife, Katie, accompanied CWU’s student jazz band to the New Generations Jazz Festival in Monterey, California.

“It’s a by-invitation-only college competition that included big-name schools of music from USC, UNLV, and the University of Miami. I thought that it was an honor to be there,’” he said. “The end of the story is that Central’s jazz combo ended up winning the competition and then being invited to perform at the famous Monterey Jazz Festival itself. Katie and I felt joy in sharing that experience with our faculty and students, even though we played no direct role in their performances.”

Gaudino often slips into the plural “we” when describing his role as president. He noted that his wife had been a true partner throughout his time as president, attending countless meetings, university events, and other functions.

“We have done everything together. She has been at my side and I at her side throughout our life together,” he said. “About the only time Katie does not share equally in her passion for the activity is on a cold football Saturday. She is more likely to be in the heated press box while I tend to be pacing the sidelines,” he added with a smile.

“Without her encouraging me on the bad days and keeping me humble on the good ones, it would not have been possible for me to do this job for 12 years.”

As for his legacy, Gaudino is reluctant to go there. 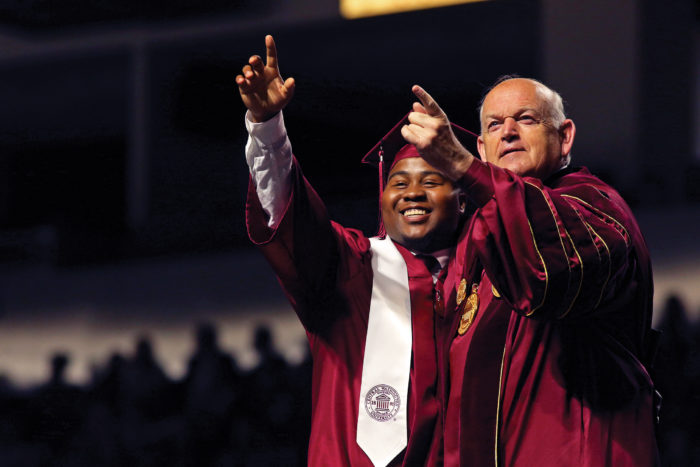 “Legacies are the things that other people remember,” he said. “So I will leave that for others to consider. My hope is that Central continues its efforts to enhance the culture of giving, sharing, and achieving that is so central to our success.

“It is sometimes said that a past president is a bit like the last sandwich on the picnic table, the one that has been the sun for too long,” he added. “It is time for a fresh tray to arrive. Of course, I am speaking of Dr. Jim Wohlpart and his wife Sasha. I hope they get the same support that Katie and I received and that thoughts of our legacy fade as they work to build theirs.”

Speaking about his successor, Gaudino had a few words of advice: “My biggest challenge was needing to have patience. Most presidents I know are competitive, goal-oriented individuals, and those qualities can sometimes conflict with an institution’s commitment to deliberation and shared governance. Change takes time, and it took me time to fully appreciate that fact.”

He also encouraged the new president to “trust the great people who make up Central Washington University. Katie and I found it essential to be the authentic versions of ourselves and never to play roles. The university and local community prize honesty, candor, and authenticity.”

Gaudino is less certain when it comes to discussing his own future plans. He admits to being the type of person who must remain active, doing something.

“I have considered myself a person with hobbies, though I rarely engaged in them,” he joked. “I play golf, but infrequently and poorly. I flyfish, but not very well. I like to work with wood, but I don’t have my tools anymore. I want to restore old cars, but I have been working on the same project for 10 years, and it is still in pieces. So, one or all of those things.

“We have two wonderful sons that we want to visit with more often, and Katie and I were recently blessed with a granddaughter. So, I suspect we will be traveling and spending time with family,” he said.

“Whatever we do and wherever we are, we will remember the many students, faculty, staff, and alumni we had the privilege of meeting over the last decade,” he continued. “And we will also be tuning into The Burg to keep track of the Wildcats.”