Learning How to Feel at Home Again

Return to civilian life can be daunting, but it can also be empowering.

When you have been immersed in military culture for most of your early adult years, the transition back to civilian life isn’t as easy as you might think.

People outside of the military speak and act differently. Schedules are more relaxed. Daily responsibilities don’t seem as urgent. No one is barking orders — and, if you want to, you can bark back.

The biggest difference most service members experience when trying to readjust to a typical American routine is that there isn’t an established “mission.” It’s just normal life.

But, as many CWU veterans can relate, relearning how to be independent and self-reliant feels anything but normal. In fact, the contrast can be downright disorienting.

“You tend to have a certain state of mind when you’re in the military,” said CWU senior Edwin Torres, who served in the Marine Corps from 2010-15. “A lot of service members don’t realize they’ve gotten so used to doing things a certain way, and it can be hard for them to switch it off. It’s definitely a learning experience getting back into the civilian world. There’s no chain of command; you’re just on your own.”

Torres, 28, joined the Marines out of high school, working as an aviation mechanic primarily on U.S. soil. He was deployed to Afghanistan for seven months in 2013 and began pursuing his degree in 2015, spending two years in junior college before moving to Ellensburg.

He said the most difficult adjustment he had to make when becoming a full-time student was relating to classmates who were typically five years younger than him.

“I found myself searching for people who had the same experiences as I did, but I realized that wasn’t always going to be possible,” said Torres, a native of Moses Lake who plans to complete his geography degree at CWU this fall.

“There were sometimes gaps in maturity, and it was frustrating to see people who were talking and texting in class because the only reason I was there was to learn. But I eventually learned to interact more with my classmates. The biggest thing for me was learning to let things slide a little more. You just have to take it one day at a time and try not to be so high strung.”

CWU alumna Kristin Ashley experienced many of the same challenges when she started college a few years after serving as an Army combat medic from 2004-09.

Now 35, the Ellensburg native didn’t begin pursuing her dual degrees in global wine studies and tourism management until 2013, eventually graduating from CWU in 2017 after earning an associate’s degree from Wenatchee Valley Community College. She discovered early on that interacting with classmates 10 years her junior was going to be a challenge.

“At first, it was hard for me to work with other people who didn’t take things as seriously as I did,” said Ashley, who worked in a detainee facility in southern Iraq from 2006-07. “I was hyper-focused and I was always trying to find people to help me accomplish the ‘mission.’ On group projects, I realized that the mission wasn’t the same for everyone, so I would always take the lead so I could get the grade I wanted.” 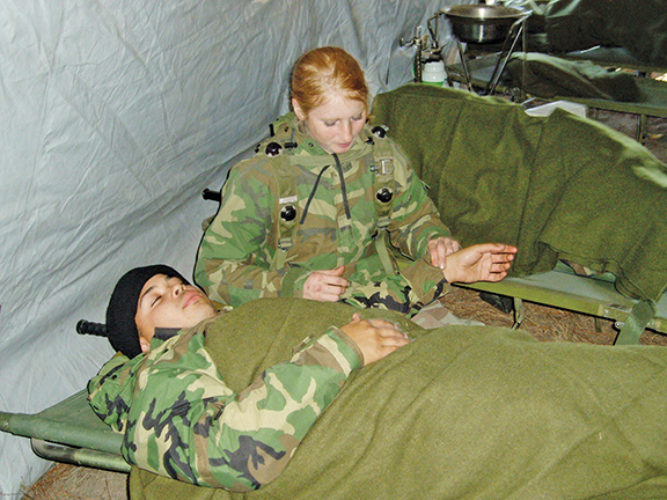 As time went on, she figured out how to adjust to the different dynamics on campus. Her leadership instincts never went away, but Ashley learned to soften her approach, allowing her to enjoy the latter part of her education even more. That shift in personal style also reminded her how the world outside the military operates.

“Toward the end of my college career, I learned to recognize other people’s strengths and give them time to become part of the communication process,” said Ashley, a former event coordinator whose current job involves educating the public about renewable energy. “I learned how important it is to give people time to express their ideas, rather than just assume a leadership role. That was a real growing experience for me.”

Most returning service members can relate to what Ashley and Torres endured when trying to reestablish themselves socially. Whether you end up on a college campus or working for a private company, almost everything you do feels different, at least for a period of time. 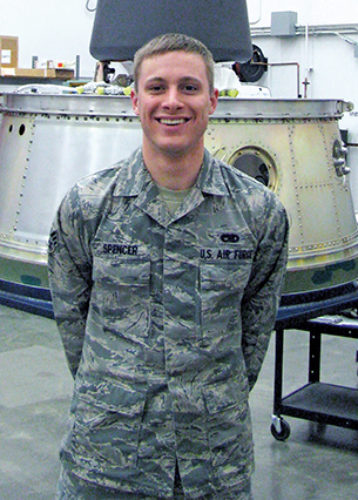 As 2018 CWU graduate Will Spencer discovered, the protocols and social norms common in the military don’t always translate to civilian life.

“The main difference I saw was that the other kids on campus didn’t have much experience living on their own,” said Spencer, 32, who served at Malmstrom Air Force Base in Montana from 2009-15. “For them, it was some kind of mountain to climb. But for me, it was just another hurdle along the way. We were approaching college from two completely different points in our lives.”

When Spencer started his education at Arizona State University in 2015, most of his peers were eight years younger. He said they all seemed to be searching for the independence he had already discovered while working three years in construction and six in the military. In some ways, he felt like the proverbial man among boys.

“I felt obligated to go to class and get good grades because that was my job,” said Spencer, a native of Goldendale who now works in residential construction in Pensacola, Florida. “I thought everyone else would be the same way, but a lot of my classmates were still coming into their own. It was interesting to see that contrast.”

For some service members-turned-college-students, having considerably more life experience than their peers can feel awkward at times. But, as CWU alum Josh Klinger discovered, there are also some advantages to being the old guy on the block.

The 2014 environmental studies graduate experienced his own re-initiation period when he came to Ellensburg in 2010. And while he went through some social challenges of his own, Klinger said he quickly learned to use his maturity to his advantage.

“I was a typical college student, but I was just a little older than the other freshmen,” said Klinger, a former Navy corpsman who was on active duty from 2006-08 and in the reserves until 2010. “One of the big advantages I had from being in the military was that I could buckle down and get my work done when I needed to. I had already learned self-discipline, which helped me focus better than some of my classmates who were still figuring things out.”

Like Torres, Ashley, and Spencer, Klinger felt an obligation to do well in school. He wanted to maximize his opportunities for future success, but he also wanted to live up to the commitment he made when he enlisted in the Navy during his senior year at Sedro-Woolley High School.

“I didn’t have to be there; I was being paid to be there,” said Klinger, 33, who was deployed to Iraq as a Navy hospital corpsman for eight months. “To me, it wasn’t a free ride. I felt like I had to earn my education.”

That sense of commitment ended up paying off for Klinger, who graduated from CWU with a 3.4 grade-point average despite some early struggles. He found a way to persevere, and now he’s working toward a career in public safety.

“I remember tanking my first test and telling my professor, ‘I don’t know how to learn anymore,’” said Klinger, who works as a bus mechanic in his hometown of Sedro-Woolley. “But he was able to teach me how to become a student again, and it worked.”

CWU graduate student Alex Salazar said his experience in the Army not only made him a better student; it taught him to strive for excellence.

The National Guard lieutenant finished his undergraduate degree in information technology and administrative management (ITAM) in June, earning a 4.0 GPA. He’s currently pursuing a master’s degree in ITAM, also at CWU, and credits his military experience for helping him excel at every challenge he encounters in life.

“I would say the military helped shape me as a student because it taught me to never settle for the bare minimum,” said Salazar, 26. “When you have military discipline, you do whatever you have to do to complete your assigned duties. Not doing an assignment isn’t an option, and I carried that mentality with me into college.”

Spending time overseas also has proven beneficial for Salazar, a native of Southern California who discovered CWU when he was stationed at Joint Base Lewis-McChord near Tacoma.

During his time in the Army, he traveled to Japan and spent six months in Kuwait. Those experiences, combined with trips to visit his extended family in El Salvador, have given Salazar a valuable perspective about the world that has helped him relate to people from many cultural backgrounds.

“Going to Japan really helped me in my general studies and Asian studies classes because I felt like a knew more about the culture than what is portrayed over here,” he said. “That helped me get to know my Asian classmates better and understand where they were coming from. Kuwait had a similar effect, and it helped me connect with some of our Saudi students on campus.” 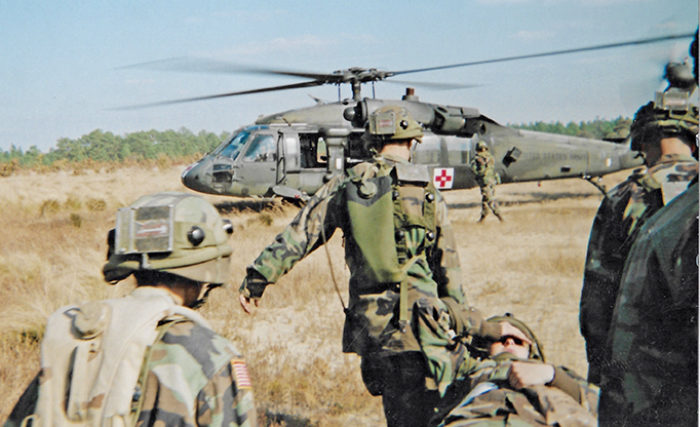 Ashley, the retired Army medic, said her time in the military also helped her better relate to people from a range of cultural and socioeconomic backgrounds. She emerged from her military service with a newfound appreciation for her own life circumstances.

“Coming back home from Iraq, it was interesting to me to see how insulated we are from the sacrifices others in the world make so we can have our way of life,” Ashley said. “I am very grateful that I was born here and not somewhere else—especially as a woman.”

Similarly, Salazar said he wouldn’t be the same person today if he hadn’t made the decision to enter the ROTC program out of high school in 2012. Now, he uses his experiences from the past eight years to educate and empower others.

“Starting college at 23, I had a lot more life experience than most of my peers, and that really benefitted me,” he said. “But I don’t use those experiences to set myself apart; I use them to
encourage people. I tell them it’s OK if you don’t have it all
figured out. I am graduating at 26 and barely starting my career, so they will have four years of work experience that I never had.”

Torres, the former Marine, also leans on his military training to help other people, serving as a Vet Corps navigator for CWU. The Washington State Department of Veterans Affairs program provides a support network for students with military backgrounds to help them achieve their higher education goals.

“We’re there to help students and their families with the transition, and provide them with the resources they need to succeed,” Torres said. “It’s kind of come full circle for me because, just a few years ago, I was the one coming out of the military and having trouble adjusting. Now, I’m helping out other veterans as much as I can.”