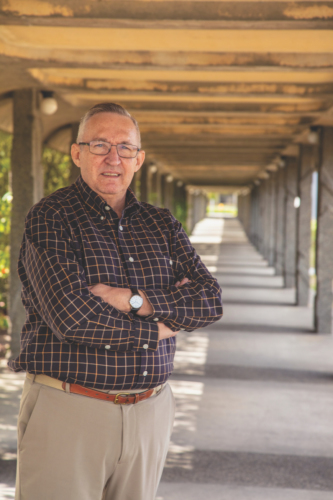 After spending seven years in the military, Vietnam War veteran Rick Nelson came home ready to take on a new mission—earning his college degree. Almost simultaneously, he began school and took on a role as a security officer at Virginia Mason Medical Center in Seattle.

Two weeks later, however, Nelson was promoted to director of safety and security at Virginia Mason.

“I was the first director of that department and that changed my school plans,” he said. “I also met my wife and stepson, and life took over at that point. I continued my career at Virginia Mason and waited until my stepson got out of high school before going back to school.”

Upon his stepson’s graduation in 1987, Nelson returned to school as a non-traditional student and earned his associate of arts degree from Green River College before transferring to CWU-SeaTac.

“The evening classes, and how they were set up, were ideal for me as a working adult,” he said. “The classes were small—anywhere from eight to 15 students who were also working adults, typically—so that was great for interchanging ideas and being able to learn from others. Any time that I had a paper or assignment due, I was able to translate a project or something I was doing at work into it.”

After graduating from CWU-SeaTac in 1990, Nelson went on to get his master’s degree in public administration from

Seattle University. He endured five years of night school, all while working full time, but he says his extra effort was worthwhile because it led to a long and successful career in the healthcare industry.

Nelson’s last job was a ten-year stint as the Seattle Cancer Care Alliance safety security and emergency preparedness director. Now retired, he and his wife live in Thailand six months out of the year.

“My education really had a huge impact in launching me professionally, into professional organizations that I ended up leading,” Nelson said. “I wouldn’t have achieved that level of success without a great educational foundation.”