Marc McPherson doesn’t consider himself an artist. In fact, he is a lieutenant in the CWU Department of Police and Public Safety.

But when he’s not out patrolling the campus, one of his hobbies is firing up a welding torch and creating a dragonfly, a dog, or a fisherman from old car parts, broken tool pieces, scraps of metal, and wire.

“I was a LEGO kid. I love putting things together. I would spend hours playing with LEGOs,” he explained. “When I got to college, I got my first project car; it was a’67 Mustang. And since I didn’t have enough money to have somebody rebuild it or restore it, I fixed it up. So, I had to learn how to do everything by myself.”

McPherson said that included purchasing “the cheapest welder I could find” to do body work. The Mustang project led to several other car rebuilds and, eventually, a garage filled with assorted car parts.

“I wouldn’t call myself a hoarder but I am kind of a pack rat,” he laughed. “If it looks like it could still be used, I hung on to it. And if they were kind of cool-looking, I would keep them, although I have no idea why.” 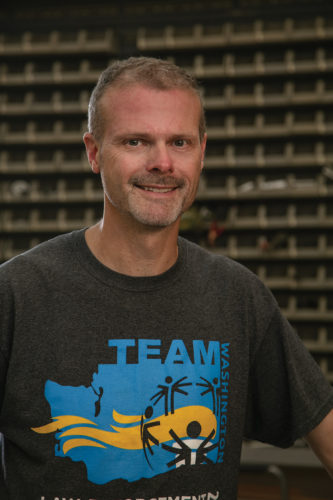 McPherson amassed a collection of stray parts over time, and when he upgraded his welder a few years ago, he decided to practice on some of them before attempting to use it on a car project that might require more skill and experience.

“I had some broken tools and some broken parts and, of course with the advent of the internet, I looked up all the cool ideas for things you can make,” he said. “Some interesting welded art pieces showed up, and I thought they were pretty cool and that I could probably do that.”

After crafting a handful of objects, including a scorpion made using an old spark plug, parts of an old screwdriver, and assorted widgets and wires, he showed them to his friends. The mother of one of his friends’ wives, who works at the Clymer Museum & Gallery in Ellensburg, liked his work and asked him to submit some pieces for the museum’s gallery.

The result was his first showing as part of a New Artists Wall exhibit at the Clymer earlier this year.

“I guess it took off from there,” he said. “Somebody called and asked if I would sell them. Since then, a few pieces have sold and there are only a couple left down at the gift shop at the Clymer Museum.

“So, I kind of feel the pressure to build some more because they’re [the Clymer Museum] making money off of them and I’d love to support a local business.” 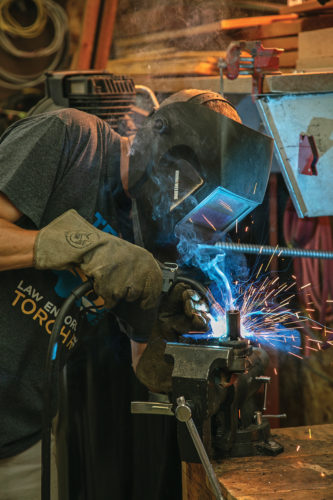 As for where he finds inspiration, McPherson said it can come from looking at works created by others and sometimes by just looking at an object and seeing what he wants to craft.

“There have been a couple of times when I looked at a part and said, ‘I know what that’s going to be,’” he said. “So, one becomes a dog’s head and another becomes a cowboy. The latter was a U-bolt strap for a rear-wheel drive car and when you flipped it upside down, it looked like a bow-legged cowboy.

“So, the pieces sometimes dictate what you end up creating. A piece of welding wire makes a great lasso or a fishing rod.”

A CWU grad (BA, Law and Justice, ’96), McPherson originally intended to be a biology teacher—until encountering a couple of tough chemistry classes—then switched his major. “It was pretty early on when I realized that the chemistry portion in biology was maybe not for me,” he said.

After graduating from Central, and while his wife, Sharrie, completed her teaching degree at the university, he took a job as a corrections officer at the Kittitas County Corrections Center. In 2003, he was hired by his alma mater.

“I thought maybe I would work at Central for a few years and then go to the county or a bigger agency, but within a couple of years I fell in love with it,” he said.

He said the job allows him to incorporate some of the skills he would have used if he had become a teacher, although in this case he is guiding students on how to safely enter adulthood, coping with being away from home for the first time, and ways they can keep themselves safe.

“I still enjoy mentoring and teaching and doing some of the same things I would have done as a teacher in my position,” he said. “After a couple of years working here, I realized how much time we get to interact with students, which I enjoy.

“I love knowing that I can put on my uniform, go out and interact with them, and I can still be a bit goofy with them,” he continued. “I can go into a residence hall and shoot pool or play foosball or whatever they’re playing for a few hours and when I go back to my boss, I’ll probably get a high-five and not a reprimand.”