“Alexa, what are my Monday morning classes?”

It’s a question that dozens of CWU students will soon be able to ask—and have answered—as a result of a new customized version of Amazon’s popular cloud-based voice service that has been installed in rooms in Dugmore Hall.

Students will soon have access to accurate, up-to-date information on more than 16,000 potential questions including about campus events, class schedules, and homework due that day.

The application was created by a team of CWU computer science students working with a consulting firm, Hybrid Cloud Gurus.

“Today’s students expect universities to provide voice-enabled technologies that align with how they interact and engage with the world around them,” said Andreas Bohman, CWU’s Vice President of Operations, whose department is supplying the Echo Dot devices. 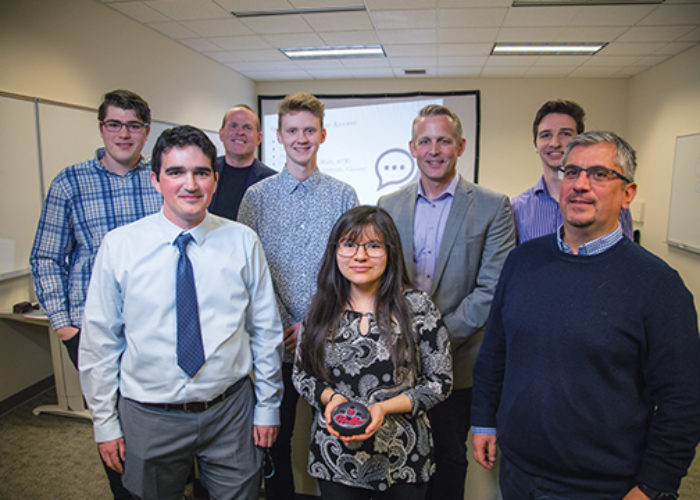 “This is a small portion of what we should do as an institution to prepare for Generation Alpha. They are, essentially, children born in 2010 and later who are coming to campus with an expectation of access to technology,” he continued.

Hybrid Cloud Gurus’ principal Bob Rapp agreed, saying, “The mentorship we do here on campus is all about making sure that the students are interacting with next-generation technologies.”

The Central-centric personal assistant program was developed through a 10-week, winter quarter capstone course that allowed the students to customize the devices so they are more campus-oriented while ensuring the privacy of student users.

During a proof-of-concept demonstration at the end of the winter quarter, the five participating students had a chance to reveal their achievements. Senior Riley Krall, of Snoqualmie, was among them. The project helped him hone his skills for his desired work in software development.

“Dealing with cloud services is not something I had (done) before, but it’s absolutely relevant,” he said. “Working with this project gave me a lot of valuable experience that will be valuable in my career.”

Rapp added that the students did such a good job with the design and user testing that the frequently asked questions (FAQs) could be rolled out soon to all student phones and voice-enabled devices. He said the main thing they needed to do was figure out what students cared about and how, if they asked a sensitive question, they could find better answers while remaining anonymous.

The FAQs include details about campus building hours, event times and locations, as well as students’ classes and assignments that are due on a particular day.

“They did a really good job of architecting this solution,” he said. “They were really smart and efficient about how they designed this. I’m really proud of their work.”

Krall said the different capabilities and what the students managed to implement went beyond what they thought they would get out of the project.

“It actually does make it easier to quickly learn information about Central,” he said.

The information, which is continuously updated, pertains to the Ellensburg campus and the university centers and instructional sites too.

“Students, faculty and visitors on campus were all asked to interact with the Alexa devices,” Rapp explained. “The results were overwhelmingly positive. Everybody liked the fact that they could ask a question specific to Central and about the university centers and instructional sites as well.”

Rapp said the plan is to have an extended trial, involving more students and then next year release it on a limited basis and put it into production. In the future, he imagines adding similar devices, such as Google Voice.

“We might also add AI (artificial intelligence), which could link a particular question to additional information that might be relevant but was not sought as a part of the original question,” he said.

CWU computer science professor Szilárd Vajda, who served as the students’ advisor, praised the students’ work and added, “As this project has been so successful, the next generation of capstone projects will, probably, continue to develop the skill capabilities of these devices.”

Bohman said the partnership is a great example of how the university connects student-led initiatives to long-term strategies in delivering new technology solutions to campus.

“This has been a great opportunity for our students and our university,” he said. “Being able to work on emergent technologies in an entrepreneurial incubator setting is a unique and invaluable experience for our students.”

Or, as Alexa says: “Thank you for trying Central Connect. Have a nice day.”